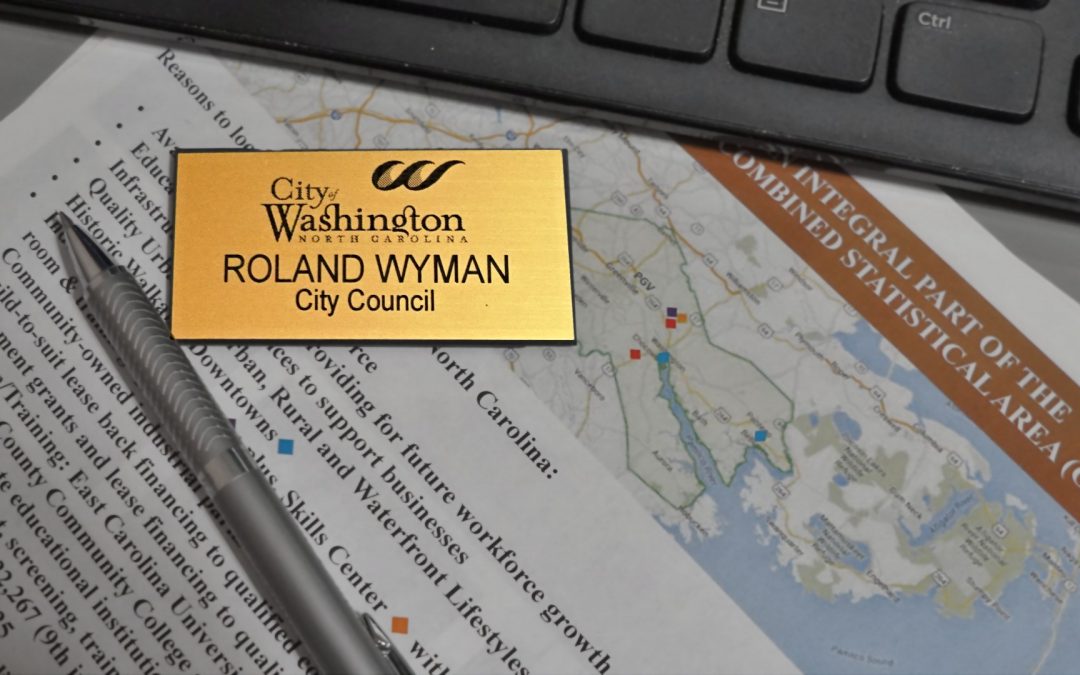 What I’m About to Say…

This is my first post since being sworn in to Washington city council, so let me start by explaining that what “Roland Wyman” says here should not be mistaken for “Washington City Council Says”!

All throughout the month, I’m “Roland Wyman”, neighbor, business guy, amateur chef, volunteer. Then on certain Monday evenings, when I sit down with the other city council members, and Mayor Hodges smacks his gavel down, we are suddenly that group that can make decisions and commitments on behalf of the city.

That means, we are making decisions and commitments on behalf of all of us; you and me.

Something about that concept sounds kind of mystical, doesn’t it?

So, remember; when I say something here, like, “I think the city should…”, or “I’m going to try to have the city look into…”, don’t expect to read “Wyman Says the City Will…!”, in tomorrow’s paper.

Technically, Monday December 11th, 2017, was my first official city council meeting, but that was when I was sworn in toward the end of that night’s session.  I had the honor of nominating Virginia Finnerty to be our Mayor Pro Tem, and that was about the end of our session.

What an experience it was, folks!

Regardless the issues, or which subjects were being discussed (I’ll certainly have more on that in other posts), I was really focused on the significance of exactly what it was that I was doing in that seat.

If you’re like me, you probably had a hard time paying attention in civics class back in school.  At that age, all that talk about municipal, county, state, federal government, and all the terms such as mayor, commissioner, governor, presidents, blah, blah, blah, just blended into a blur and meant very little.

I really, only concentrated on memorizing enough to pass those tests!

Then, as I (gradually…) worked my way into adulthood, I began to understand, bit by bit, just what some of these aspects of our society really mean because some were affecting me directly.  Sound familiar?

So, let’s look at this one case, city council, and think about what I was actually doing in that seat;

There are just under ten thousand of us living within the city limits.

For those few hours on that Monday night, I was the eyes and ears, and the voice of all ten thousand of us!

That’s right.  For each item we were considering, everything the city council was asked to think about or consider, I thought, “I’m reading this document, I’m listening to this discussion, and what does it mean to each, and every one of us residents?

What do we want?  What do we find objectionable?  What will move our city in the right direction?”

It’s an amazing and ponderous concept.

All of us who live in Washington are sitting in those five seats on those Monday evenings between the time Mayor Hodges gavels the session open and when he gavels the session closed.  (I know that makes for a really odd mental image, but work with me here!)

At some point during that recent meeting, I glanced at the others to the right of me, and folks, I saw, I knew I was seeing… four others who were thinking exactly as I was.  I could see it in their faces; “Here Sits All of Washington, NC”.

I will continue to bear in mind that everything I do when I take that seat, on those future Monday evenings, along with everything I do involving the preparation, the research, the meetings, phone calls, etc. leading up to those council meetings, I will be doing as your eyes and ears.

You’ll be watching me in everything I do, every decision I make with the council.  And when I speak up, I’ll be speaking with the voice of all ten thousand of us.

Will it be two years of blissful harmony?  I think you know the answer to that.  Consider your own family; you love your family, you work hard for them and do everything with your family in mind, but that’s not always “blissful harmony” is it?

I’m sure there will be issues to consider where it seems like there are almost ten thousand differing opinions, but just as we maintain our unwavering loyalty and commitment to our families, I won’t forget that my work is dedicated to all of Washington.

Well, that’s my take on what this job is all about.  Next, I’ll have a look at some of the items we heard about during that meeting. So be sure to check back, and remember; “Our City is in Our Hands!”

The views and opinions expressed in this article are my own and do not necessarily reflect the official policy or position of any other entity or organization or government body.